The Indonesian Tourism Minister has banned people from taking selfies without face masks in all tourism areas, including Bali.

The Tourism and Creative Economic Minister, Sandiaga Uno stated that despite implementing a strict prevention protocol in the tourism areas during this reopening trial of the tourist attractions for domestic visitors, Covid-19 transmission might still occur when people get too excited during their vacation, causing them to neglect the importance of mask-wearing in the public areas.

“One of our weak points on the implementation of prevention protocols at the tourism areas is when people take selfies, they tend to take off their facemask, although it’s forbidden to do so.” Sandiaga said during his Weekly Press Briefing on Monday (20/9).

Other than that, he also expressed his concerns with the implementation of the QR code scanning at the tourism areas, which has the potential to cause large crowds when inevitable errors occur. He also explained that the government has given some leniency on their policy such as allowing children below the age of 12 years old to gain access into the tourism areas with supervision from their parents. “As long as the parents have completed the second dose of the Covid-19 vaccine, which can be seen in their PeduliLindungi tracing apps, we let the management of each tourist attraction including shopping malls decide whether to allow them to get in or not.” Sandiaga added.

However, he explained that the influx of domestic tourists began to surge since the government relaxed some rules and implemented some leniency for businesses to reopen under strict protocols. He encourages people to stay alert and keep complying with the government’s instructions. He also urges travelers to avoid visiting tourist areas with large groups, and start exploring tourism villages to reduce the risk of creating a cluster of Covid-19. 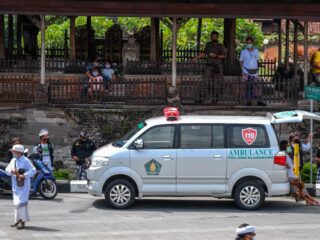 Next
Bali Activists Collect 10 Tons Of Garbage In One Month After Installing Barriers On Rivers
Click here to cancel reply.

Taking a selfie out in the wide open air, lowering your mask and staying a distance from others should not be a problem.

Overthinking can be counterproductive.

I'm very keen to know about Bali, I love to visit

Mask & Sunglasses = Who is who. Selfies belongs more or less to the past.

Is this serious…? Surely not !

That's a ridiculous concern. People taking selfies? What do they think is going to happen. The people taking a pic of themselves giving themselves covid or something? Makes no sense.