Mangku Nyoman Kandia has been a tour guide in Bali since 1984. He says he’s lost track of the number of people he has taken on tours from around the world, but nothing has prepared him for this.

“No tourist, no money,” he said simply.

There are few places in the world where hospitality and tourism are as ingrained in people’s psyche and development than Bali.

The Indonesian island’s colourful culture and religious norms have been shared with millions since it was first discovered by international travellers.

But earlier this week, the Indonesian Government declared a state of emergency due to the global coronavirus pandemic.

It announced it would ban all foreign nationals, except for diplomats, permanent residents and humanitarian workers, from entering the country.

Many of Bali’s 4 million residents have been relying on the tourism industry for generations, but with people staying home due to the coronavirus travel restrictions, its residents are struggling.

“The coronavirus has collapsed the Balinese economy … it’s been a steep drop since [mid-March] when social-distancing measures were put in place,” Mr Kandia said.

“[Economically] it’s currently much worse than the Bali bombings and the Mount Agung eruptions.”

Preliminary figures from Bali’s international airport shared with the ABC show a steep drop in both arrivals and departures in the last two weeks of March. 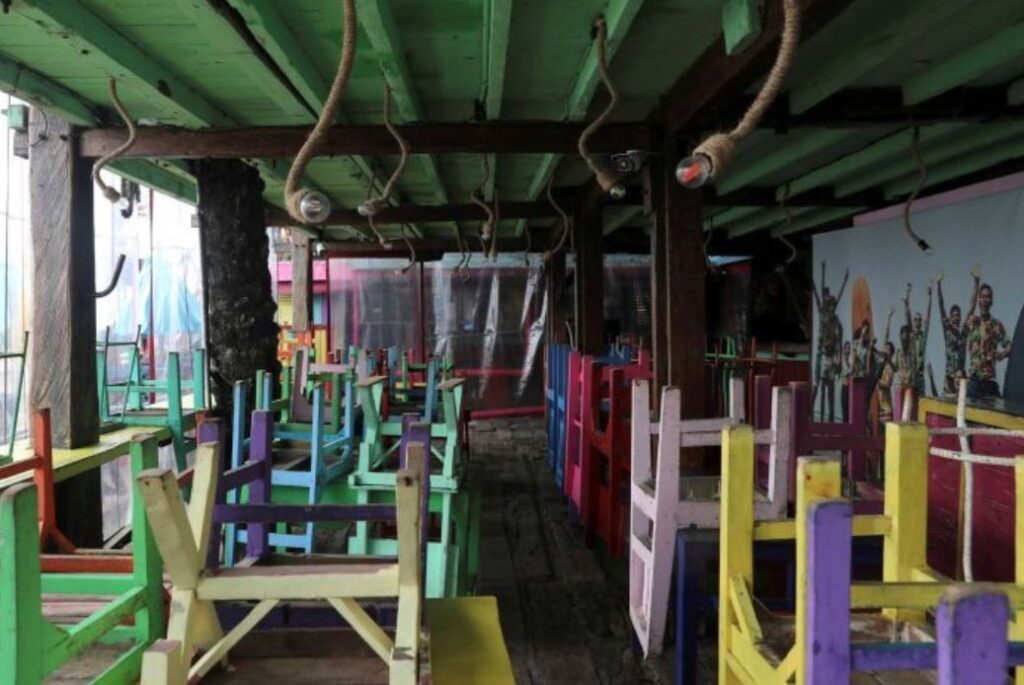 On April 1, only four international flights arrived and departed from the airport — a more than 95 per cent drop compared to the same day last year.

In 2019, there were more than 1.3 million Australians who travelled to Bali — a love affair stemming back to the 70s that has seen many return for cheap holidays, retirement or for business opportunities.

Now the bustling street vendors have shut up shop, the once-packed beaches are deserted. With many hotels closed, thousands have been left to grapple with a new reality.

I Ketut Ardana, head of Bali’s branch of the Indonesian National Organisation for Tours and Travel (ASITA), told the ABC almost all tourists had left the island, and those left behind were stuck and hoping to get home.

“Eighty per cent of people in Bali rely on tourism whether directly or indirectly,” he said.

“All of us in the industry are really struggling right now, what we’re waiting for is for this pandemic to end.”

He said there were around 7,000 tour guides in Bali like him who were out of a job, and like many others in Asian nations, stay-at-home orders were hard to follow when living hand-to-mouth.

“From [earlier this week] good Samaritans have been giving out boxes of rice to 500–1,000 gig economy drivers,” he said.

“Hotels, villas and restaurants are starting to close, there have been no activities.”

Kevin Adhipramana was only three months into his two-year contract at a five-star resort in Bali’s tourist hotspot of Kuta before he, and hundreds of others, were told the hotel would close indefinitely.

“We were at less than 10 per cent occupancy before the hotel finally announced it would close on April 1,” he told the ABC.

“I’m now looking for any available work. Regardless of the situation, we all still have daily needs.”

Hospitality is not the only industry taking a hit. Bali has become an increasingly popular location for destination weddings in recent years, but the outbreak has forced many couples to cancel their ceremonies.

Govinda Rumi has been a wedding photographer for almost a decade. He told the ABC most people had cancelled their weddings this year.

“Most of my friends who work in international weddings rely solely on tourists,” he told the ABC.

“There’s zero income … I cannot see another wedding for me this year, because even if it gets better, people aren’t really spending that much money.”

He said there were around 5,000 wedding photographers in Bali, but there were also many wedding planners, florists, caterers, event hire companies and decorators who were now out of work.

“Photographers are staying alive by setting up home kitchens, or delivering food … so it’s time to get creative to survive,” Mr Rumi said.

Pandemic a ‘lesson’ for tourist-driven economies

Tourism accounts for 10 per cent of Indonesia’s total workforce, employing more than 2 million workers, the vast majority in Bali, according to 2018 data from the World Tourism and Travel Council.

The Indonesian Government announced three separate economic stimulus packages worth a total of $40 billion to keep Indonesia’s economy afloat during the pandemic, including tax breaks and specific subsidies for companies and individuals.

They have also announced an online upskill and training initiative with financial benefits for those who are economically impacted by COVID-19 in three regions, including in Bali.

However, there are many people who still cannot access the program, or do not qualify, leaving it up to local councils to provide food handouts to those in need.

Sam Huang, professor of tourism and services marketing at Edith Cowan University, said the “unprecedented” devastation on the tourism industry extended much further than Bali.

“Tourism businesses are finding a very hard time now as a lot of national and state borders are closed and people’s mobility is tightly controlled to curb the spread of the coronavirus,” Professor Huang said.

“The financial costs would be huge.”

He said in Australia, the income from inbound tourism could drop by two-thirds compared to last year.

“For nations and regions that heavily rely on tourism in their economic structure, the loss is even bigger,” he said.

Professor Huang added that tourism industries may only be able to recover after two to four months from the time the pandemic is declared over by the World Health Organisation.

“This pandemic gives us a lesson to reconsider what the appropriate proportion of tourism in a country or region’s economy [is],” he said.