A truck driver named Ivan Hauser Tahun from So’e, East Nusa Tenggara has been arrested after running over a traffic police officer in Bali.

The Head of the Denpasar Police Department, Kombes Pol Jansen Avitus Panjaitan confirmed that the suspect has been arrested for running over a police officer named Aiptu Ketut Suardana while he was on duty managing traffic while a vehicle of the Health Agency was being escorted by the police to deliver Covid-19 vaccines in Denpasar on Saturday (19/6).

“According to our investigation, the suspect was proven guilty for neglecting the traffic officer’s instruction, and caused serious injuries to the officer.” Kombes Pol Jansen said on Wednesday (23/6). The incident occurred when the victim attempted to manage the traffic while a vehicle from the Health Agency was passing through the Pesanggaran intersection to deliver Covid-19 vaccines that had just arrived from Jakarta.  “The suspect who was driving a truck allegedly neglected the police’ instruction, and ran over the victim, causing him to suffer from a head trauma and several bone fractures.” Kombes Pol Janses added. The victim was transported to Sanglah Public Hospital to receive medical attention.

Meanwhile the Head of the Bali Police Department, Irjen Pol Putu Jayan Danu Putra who felt sorry for the incident that happened to one of his officers decided to visit the victim at the hospital as a form of support to the victim and his family on Monday (22/6). “I feel deeply sorry for what happened to one of our officers, and I hope he will recover as soon as possible.” Irjen Pol Putu said. 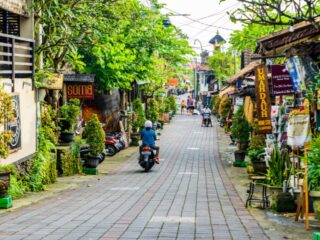 Next
Man Mobbed And Arrested For Stealing Shampoo From Minimarket In Bali
Click here to cancel reply.

The bypass highway in Bali is so dangerous from speeding truck drivers that have hardly any experience being of young age....