A married couple who have been identified as Alexander Briant Caesar Ivanno and his wife, Gaia Anindya have been arrested after robbing an ATM machine in Bali.

The Head of the Badung Criminal Investigation Bureau, AKP I Putu Oka Prabawa confirmed that the suspects who have been living in the Puri Mas Residence North Kuta, Badung were arrested after breaking into an ATM machine that belongs to the BPD Bali Bank that is located on Jalan Raya Abianbase Mengwi, Badung during the early morning on Tuesday (29/6). “Both suspects were arrested separately after breaking into and robbing an ATM on Tuesday around 2:30am.” AKP Prabawa said on Thursday (1/7). He also explained that the bank has lost around USD 7,400 (IDR 106 million) from the incident.

According to information from the officer, the incident occurred when the bank’s staff became suspicious as they noticed that the CCTV cameras that were placed at the location appeared to be broken. Shortly after, the staff began to head over to the location to check out the current situation. They were shocked after realizing that the ATM machine was already broken, and all the money inside was gone.

After collecting information from the location and witnesses, both suspects were arrested. The first suspect named Alex was arrested from a hotel in Negara, Jembrana, the other suspect named Gaia was arrested from their house in Badung on Tuesday afternoon (29/6). The suspects have been detained along with evidence such as an oxygen tube, welding equipment, gas tube and spray paint that they used to paint the CCTV cameras at the location. “An investigation is still underway as we suspected they had similar operations in other locations prior to this specific incident.” AKP Prabawa concluded. 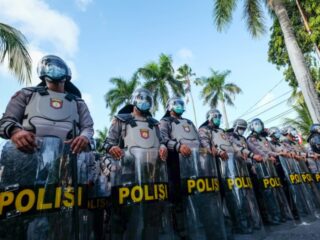 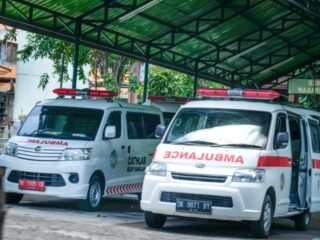 Next
The Deputy Chief Of Badung Regent Collapsed Due To Allegedly Having A Stroke
Click here to cancel reply.

Maybe it’s time to get rid of all the foreign “charity cases “ ?