Volcanic ash from the eruption of Mount Raung in Banyuwangi, East Java, reached a number of areas in Bali. Residents in Karangasem Regency, reported volcanic ash around their homes.
Precautions were taken and flights from Ngurah Rai Intl Airport were canceled due to the incident.

The Head of Karangasem Regional Disaster Management (BPBD), IB Ketut Arimbawa, confirmed that the volcanic ash from Mount Raung has reached the eastern front of Bali island in the Karangasem area.

“We received reports from the residents in Rendang, Selat, and Bebandem Karangasem yesterday that the ashes have reached their areas, but thankfully it was light and the rain has washed it out,” Arimbawa said on Wednesday (10/2).

The thin layer of ash covered the resident’s cars, plantation, and roofs, however, they were unbothered and continued their normal activities.

BPBD Karangasem prepared a large amount of protective gear including face masks in case the situation gets worse.

Meanwhile, at the Bali Ngurah Rai International Airport, operations were halted due to the eruption and some flights were canceled for safety reasons.

The Stakeholder Relation Manager of Angkasa Pura I Ngurah Rai International Airport, Taufan Yudhistira, said that the ashes don’t directly affect the operations of the airport in general, but two flights from Denpasar – Lombok – Banyuwangi and another two from Banyuwangi – Lombok – Denpasar were canceled for precaution.

An official from Mount Raung Obesrvation, Burhan Alethea, explained that the dark smoke and ashes rose 2,500 meters above the top of the volcano on Tuesday morning (9/2). The volcanic substances were carried by strong winds to the east of Banyuwangi heading directly to Bali. 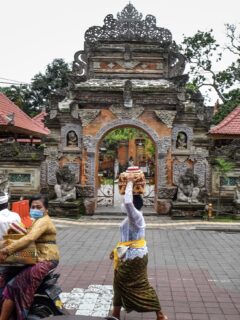 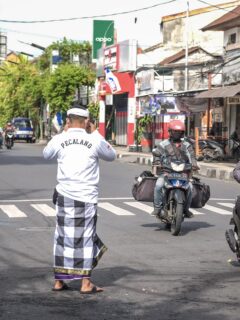 Next
Bali Villager Attacked For Not Wearing Mask
Click here to cancel reply.

Now there is double reason to wear masks.