Bali Police Seized Motorbikes From Teens Racing On The Beach

Authorities from Negara Police Department have detained multiple teenagers and seized 6 motorbikes from street racing on a beach in Bali.

The Head of the Negara Police Department, AKP I Gusti Made Sudarma Putra confirmed that he detained 6 teenagers along with 6 motorbikes from illegal street racing on Pebuahan beach on Tuesday evening (18/5). “We began our operation after receiving information from nearby residents regarding the illegal street racing on the beach in their area.” AKP Putra said.

The nearby residents who were annoyed by the teenagers reported the illegal activity to the police. “Other than putting themselves in danger, they also put the beach visitors at risk of getting into an accident.” AKP Putra added. During the operation, bystanders at the beach such as fishermen and villagers were supporting the officers for detaining the teens.

The operation was led by the Head of the Negara Police Department as he also condemns that kind of activity in his area. When they were detained, the teens were investigated and eventually they called their parents to pick them up at the police station. “We really hope this was the last case of illegal street racing in the Negara region, especially on our beach.” AKP Putra concluded. 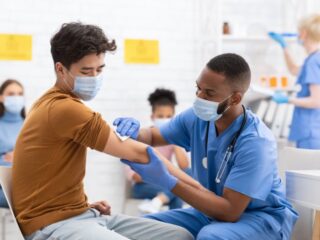 Next
Vaccination Program In Denpasar Expected To Finish By July 2021
Click here to cancel reply.

In 1980’s it’s was normal to drive motorbike on the beach.