It’s hard to believe just a few weeks ago, some visitors were complaining that Bali’s famous sand and surf spot of Kuta Beach was way too busy.

Now it is deserted, with access banned as part of measures to curb the spread of the new coronavirus, which has killed nearly 100,000 people around the world and infected more than 1.5 million.

Australians were told to return home and at least could enjoy one of the most popular beaches in the world, Bondi Beach. Then Bondi beach was shutdown and most recently all beaches along the Gold Coast in Queensland have been closed as well.

The picture in Bali is similar at other top Asia Pacific destinations such as Sydney’s Bondi Beach and Thailand’s Phuket.

“To stop the spread of the COVID-19 pandemic, all the beaches in Kuta area closed for public,” reads a sign in Bali, Indonesia, the country with the highest coronavirus death toll in Asia after China, where the virus emerged.

COVID-19 is the disease caused by the coronavirus, which emerged in central China late last year.

The virus has killed 306 people in Indonesia out of 3,512 cases, but more limited testing than in neighbouring countries means the figures are widely believed to be higher.

The long Easter weekend would normally be a busy time in Bali, but not this year.

“Business is down almost 95 per cent,” said souvenir shop owner Ruju, who like many Indonesians uses only one name. “I have to borrow money just to buy food.”

Not everyone agreed with the restrictions on the beaches.

Among them was Australian Daniel Baker, who said it would be better to just enforce social distancing of up to 2m to prevent the virus spreading.

“When I went for a surf last week I was on Kuta reef, 1km offshore, the nearest surfer was 200m away, so why can’t I do that?” he told Reuters.

“I should be able to swim or surf, it’s important for mental health and exercise to stay healthy to fight COVID.”

Arguably the most famous beach in all of Australia, Sydney’s Bondi closed to the public last month when locals had too difficult a time staying away.

Since then, Bondi’s beachside pavilion has transformed from a place to get snacks and change into swimsuits into a pop-up coronavirus testing center.

The neighborhood had been identified as a hotspot for coronavirus cases, some of which are being linked to the many backpackers who come from around the world to stay in hostels near the water.

Bans on public gatherings larger than two has forced Sydney’s Bondi Beach to close over the Easter holiday. On Manly Beach, people were allowed to exercise but not swim.

Australians have been told to stay home or face dire consequences in the crackdown against the coronavirus, even as its spread slows. Australia had 6,152 infections by Friday with 53 virus-related deaths.

The co-owner of Bondi Surf Seafoods, George Dimitrios said 2020 was the worst year in his family’s 47-year-old business and Good Friday sales had been disastrous. 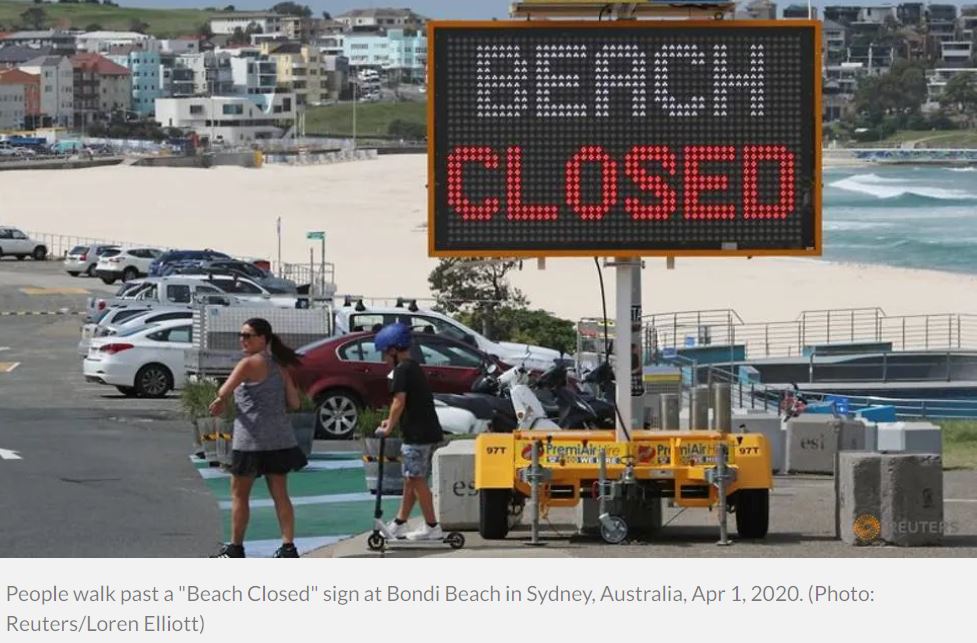 Bondi made headlines in March when thousands of people were seen ignoring social distancing rules at its world-famous beach. Authorities have since opened up a pop-up clinic.

Now, the beaches along the Gold Coast in Queensland are also officially off-limits as well.

“For us to win this fight against Covid-19, we’re in it together, and if a minority of people are congregating and spreading it … in this case, health is the number-one priority,” Tom Tate, mayor of the Gold Coast, told media. He added a warning to residents and non-residents alike: “Happy Easter, but stay home and stay out of the Gold Coast.”Prime Minister Scott Morrison announced that the country would close its borders to all foreigners on March 20. Social distancing guidelines were put into place, and non-essential workers have been sent home.”Life is changing in Australia for every Australian and life is going to continue to change,” Morrison said at the time. “For many young and old, 2020 will be the toughest year of our lives.”