A crocodile 2 meters in length has been spotted by one of the local people on the river side of Sangsang river that is located in Lebih Village, Gianyar.

The Head of the Bali Natural Resources Conservation Agency, Dr. R. Agus Budi Santoso confirmed that the crocodile was spotted by one of the local people who went fishing in the area on Tuesday morning (22/6). “The man who spotted the crocodile immediately reported the incident to the Balawista before they informed us to begin an operation to capture it.” Dr. Santoso said.

The operation to capture the animal has been conducted, involving a special team from Bali Safari and Marine Park using bait. “We’ve been trying to capture it by putting live bait inside a cage that is tied next to the Sangsang river.” Dr. Santoso added. However, he admitted that it’s very unusual to find a crocodile in Bali, as the island is not the habitat for any kind of reptile larger than a monitor lizard.

Meanwhile, some people speculate that the crocodile was deliberately released by people into the river. Dr. Santoso urged the residents around Sangsang river to avoid any activity near the river until the crocodile is captured by the authorities. “I urge all the nearby villagers along Sangsang river to stay away from the river side until we manage to capture the animal to prevent any incident that might occur from an encounter with the croc.” Dr. Santoso concluded. 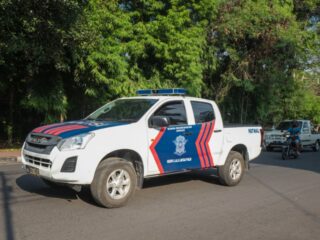 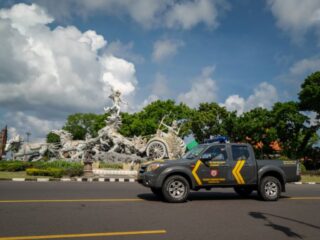 Next
Man Arrested For Stealing A Safe-Deposit Box From British Man In Bali
Click here to cancel reply.

He clearly escaped from Bali Safari & Marine park. This river runs in between the park and Lebih village…

If is it not a “tourist” from the Philippines than have to think about Florida where there are many of them because the first’s was released into water by people.

@Wayan Bo, Or somebody had it as a pet. It got too big and got dumped in the river. Or escaped by itself.