A large billboard with a picture of a girl in a bikini on Jalan Raya Batubulan, District Sukawati, was visited by officers of the Gianyar Municipal Police Unit (Satpol PP) on Tuesday. The billboard was considered to be unethical and not aesthetic for the Bali community.

Head of Satpol PP Gianyar, I Made Watha, claimed to have received reports from residents complaining about the large billboard. Billboards with pictures of girls in bras and underwear have also been seen in other locations by the general public.

“Aesthetically, such ad serving is not ethical to be seen by the general public,” said Watha. 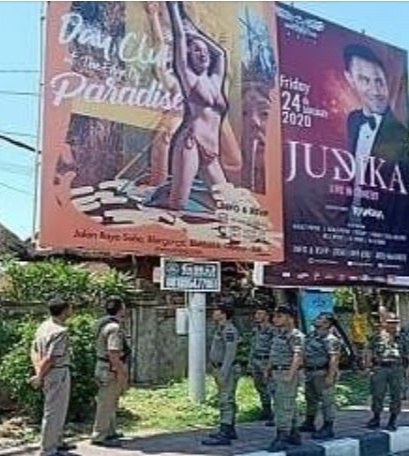 Residents have also lodged complaints and protested because of billboards depicting sexy girls side by side with local residents’ temples.

Responding to community protests, officers who came to the location of the billboard directly contacted the billboard installer to remove the sign.